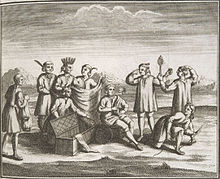 One white man in the clothes of a rough woodsman, the other wearing the long black robe of a missionary priest. On his bare feet were leather sandals, around his waist was a woven girdled rope and at his side hung a rosary and a large crucifix. These two men will be the very first white men to come to where the great river from the Onondagas village flows into Lake Ontario.

Along the river their boats glided easily however at the mouth of the river on the great lake, a wind storm was driving huge waves harshly against the southeastern shores and into the mouth of the magnificent river. The Indians in the first canoe made signs to the others that they could not forge any further against the storm made powerful waves, They turned the canoes toward the shore to the west and the others followed and all were soon on land.

The Indians where especially careful with the man in the black robe as he spoke to them in a very soft and kind voice. The Indians went to work building a shelter of poles and large pieces of white birch tree bark. Once they had finished they spread blankets for a bed inside the shelter and brought the white men meat from a fresh kill. For two days the small group of Indians and the two white men camped on the shore as the storm sent waves crashing in a spectacular silver spray along the eastern shores of the river.

The white men asked: “What is the name of this river?”

The Indians answered in their Iroquois language… we call it ““OSH – WE – GEH” …. meaning “the pouring out place, a rivers mouth” .

On the third day the storm had subsided and soon ended, the sun came out as the waters became glass like smooth and the party loaded back into their canoes and continued out of the river as their paddles flashed in and out of the water as they passed down the river and out into the massive lake. They guided their canoes to the east into the great lake past Baldwin’s Bay, Four Mile Point, Pleasant Point and on to the great St. Lawrence River, the Indians guiding and guarding the two white men all the way back to Montreal.

Who were these two white men, the very first to come to the “OSH – WE – GEH” and why? Why did they take that long and dangerous journey to the fierce Onondagas?

The man in the long black robe was the French missionary, Father Simon LeMoyne, the woodsman was Jean Baptiste. They came all the way from Montreal to convert the Onondaga Indians to Christianity. Father LeMoyne brought presents for the Indian Chiefs so that the Iroquois would hopefully be friends to the French.

The Indian Chiefs were pleased with Father LeMoyne’s gifts and gentle words. They said they would be pleased to have the French come and live in their village. When Father LeMoyne was ready to return to Montreal, the chiefs said, “We will show you the best way to go back to the big lake and a party of Indians took Father LeMoyne down the Osh-we-geh river that emptied into the great Lake Ontario. The French party had come across the St. Lawrence River and over land to arrive at the Onondagas village and were not familiar with the great river they had just traveled. This was a much more desired route and means of travel. It was much faster and without the infestation of large northern misquotes and troublesome insects or the threat of bears and wolves that dominated the wilderness of the northern territory of the state of New York.

The following year the French sent an Officer, fifty white men and three missionaries to live among the Onondaga Indians to keep them friendly and begin commerce. They came in wooden boats, they brought guns, swords and five small cannons. They wanted to show the Indians how strong the white men were.

It took them several weeks to come from Montreal to the mouth of the  “OSH – WE – GEH”River. When they had at long last finally arrived their food had been exhausted. They entered the rivers mouth and went ashore. They then sent a messenger up river to the Onondagas that they were coming and soon several canoes came to meet their French brothers with food and to take them back to their village thirty miles further up river.

The Onondagas were amazed at the wondrous cannons and gladly and eagerly traded large quantities of fine furs for a knife, a gun or beads from China they called “Wampum” and would use as a barter amongst themselves.

Within the first year however the French soon became very much afraid of their fierce neighbors, and in less than two years hastily built boats in secrete and hurried back to Montreal.

The French explorers and missionaries were the first white men to visit “OSH – WE – GEH” later named the Oswego River and sometimes the French traders would come to get furs from the Indians however they never built any homes where the river flows into the lake. Many years later they would establish a trading post on the west bank of the Osh-we-geh rivers mouth.

Father Simon Le Moyne, S.J. (22 October 1604 – 24 November 1665) was a Jesuit priest in Lower Canada who was involved in the mission to the Huron. His notability in Canadian history comes from his work as an ambassador of peace to the Iroquois.

Le Moyne joined the Society of Jesus in 1623. Le Moyne had 16 years of education and experience in the priesthood in France before arriving in the New World in 1638 and heading out to his mission in Huron country {New York State}. He was there until the Iroquois destruction of the Huron nation brought him back to Quebec in 1650.

Around 1653, Le Moyne set out on an Iroquois Mission, at great risk, that would take him through the St. Lawrence valley and into Lake Ontario, where he would reach a fishing village at the mouth of the Oswego River in present-day New York State. From there, he traveled south to Onondaga Lake, home of the Onondaga, keepers of the council fire of the Iroquois Nation. After converting a large number of the Iroquois, including some chiefs, Le Moyne returned to Canada with a favorable report. He was assigned to several more missions, including work with the Mohawks.

Le Moyne was the first from Europe to discover the Salt Springs of Onondaga, located near what is today Syracuse, New York.

On August 5, 1654, Father LeMoyne arrived in the Onondaga village with the French Jesuits. During his short stay, LeMoyne drank from a spring which the Onondagas believed to be tainted due to an evil spirit.[1] Unlike the Onondagas who considered the salt springs evil, the French instead, saw them as a money making enterprise.[1]

Father Le Moyne noted in his diary that “We tested the water of a spring, which the Indians are afraid to drink, saying that it is inhabited by a demon, who makes it foul. I found the fountain of salt water, from which we evaporated a little salt as natural as that from the sea, some of which we shall carry to Quebec.”[2]

His last journey appears to have been in 1662, when he returned to Quebec with a number of French who had been held captive by the Iroquois.

TO ORDER THIS BOOK

WHEN WE HAD IT MADE

VOICES IN THE STORM

Is a true story of courage and heroism of the men of the U.S Coast Guard. This is a riveting tale that the author's detailed description puts you inside the emotions of the brave men that perished during a rescue mission December 4, 1942.

This is a riveting tale that will put you at the edge of your chair. Available at; Rivers End Bookstore, Oswego and online at - Amazon.

The creator of this website Michael J Colasurdo also authored “when we had it made” This book is about his life growing up in Oswego, NY in the 50’s and 60’s.

it has received outstanding reviews and said to be a fun journey into the glory years of the 50’s and 60’s.

There are over 50 short stories of the greatest time in history to be young in the greatest small town in America.